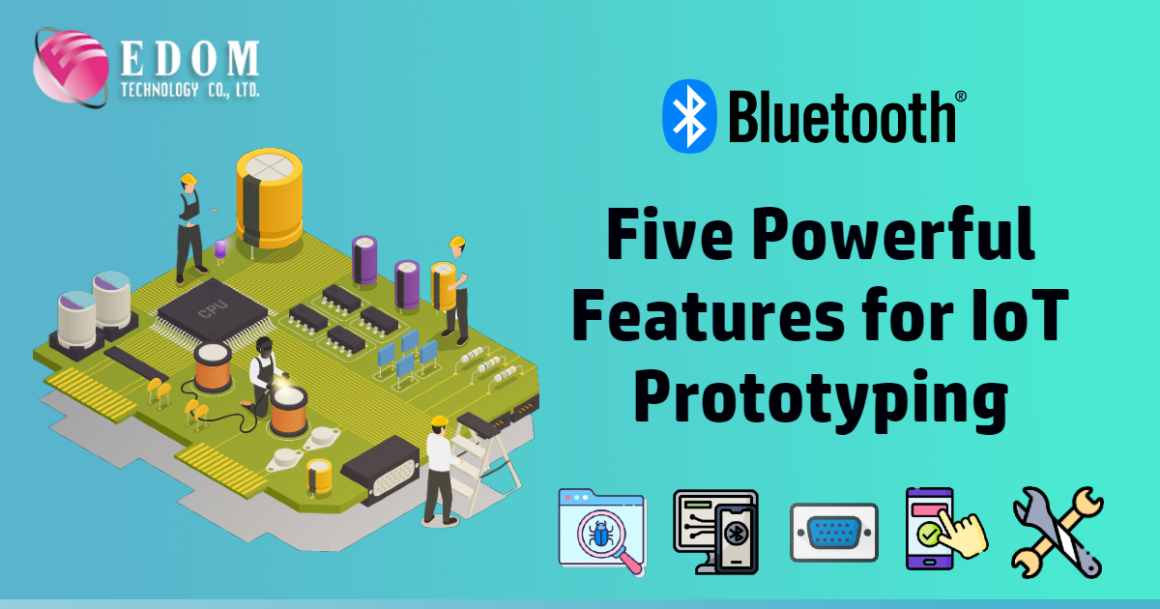 As a developer, you know that not all dev kits are equal. The features can make a huge difference in your development process. While most development kits out there do their job just fine – i.e., allow you to convert an idea into a prototype with a decent effort, there are also poorly designed kits, which can turn your project into a nightmare. However, an excellent development kit removes many headaches from your work, speeds up tracing and debugging, and provides interfaces for expansion.
But what makes a great Bluetooth dev kit? In this blog, we look at five powerful features that can accelerate IoT prototyping and enable you to create epic IoT products rapidly!
What's Rapid IoT Prototyping?

Rapid IoT prototyping sounds like yet another buzzword brewed inside the developer community. However, it's more than that. Rapid prototyping perfectly captures the way IoT products are created today. Developers build multiple iterations of their software and hardware design quickly and get early user feedback. This allows them to adjust the design based on actual user-experience and finalize a successful prototype rapidly.
There are two types of development tools for rapid IoT prototyping. You can build a prototype on Arduino or Raspberry Pi and complete the project with another, more professional software and hardware platform. However, more advanced developers prefer to craft everything from scratch with dev kits based on commercial chipsets – they allow more room for customization, and the final build is closer to a real product rather than a hobbyist experiment.
Bluetooth Dev Kit Features
So, what do you need from a dev kit to rapidly prototype an epic Bluetooth IoT product? Here's a rundown of five powerful Bluetooth dev kit features that speed up your development work:

1. Built-in Debugger
You spend a significant share of your prototyping time debugging software and hardware. A debugger is perhaps the most critical component of a Bluetooth dev kit, yet many available kits do not come with a debugger!
When choosing your next Bluetooth dev kit, make sure it hosts an on-board debugger to avoid having to buy a separate board. A debugger built on the board streamlines your dev work because you can simply flash the code and debug as it runs in the target processor. Also, on-board debuggers are typically compatible with the vendor's integrated development environment (IDE), giving you more advanced debugging capabilities.
All in all, a Bluetooth Dev Kit with a built-in debugger saves you from buying an extra board, minimizes the hassle, and speeds up development work and prototyping.

2. Bluetooth Traffic Tracer
Developing wireless products, including Bluetooth devices without a traffic tracer, is hard. You can't see what's going on in the wireless link when you run into issues in the Bluetooth protocol level without a tracer, which makes troubleshooting pure guesswork.
A dev kit with a built-in packet tracing interface, on the other hand, allows you to capture the raw Bluetooth traffic flowing into the system and analyze it with a network analyzer tool. The analyzer decodes the data into a human-readable BLE protocol format, which makes debugging a breeze.
A packet tracer interface on a Bluetooth dev kit offers invaluable debug information about transmitted and received packets in wireless links, removes the guesswork from debugging, and speeds up prototyping significantly.

3. Virtual Com Port
When kicking off prototyping, the first thing you do is to set up a serial line between the target and PC to get data logging going and commands flowing back to the processor. This allows high-level debugging – you can find out which parts of the code are not working before making the first deep-dive.
Getting a Bluetooth dev kit with a built-in virtual com port will save you from buying an external board for UART-to-USB bridging, and, again, you can remove much hassle from your project and get your prototype off the dev board faster.

4. Generic BLE Mobile App Tester with OTA
Let's face it; nobody wants to buy a Bluetooth IoT product in 2021 without a smooth smartphone App and over-the-air (OTA) software update. Suppose you want to develop excellent smartphone connectivity and OTA capability for your product, a Bluetooth dev kit with support for a generic BLE mobile app tester with OTA should be on your shopping list. It will save significant development time and helps you to launch a convincing, market-ready prototype rapidly.

5. Hardware Ecosystem Support
No developer wants to waste precious time building every component from scratch, especially when many hardware ecosystems offer vast amounts of off-the-shelf components. However, with a dev kit, which lacks standard interfaces to hardware ecosystems, you can forget about rapid prototyping – you are doomed to spend ages creating everything ground-up by yourself or wiring up dodgy, no-name components without proper documentation.
A Bluetooth dev kit equipped with the MikroBUS™ socket allows you to instantly expand your project with hundreds of auxiliary hardware components, including Click boards developed by MikroE.
However, if you don't' find what you need from MikroE's portfolio, you have other options such as the Qwiic® Connect System from Sparkfun, which is compatible with a range of boards provided by Sparkfun, as well as Adafruit, and Seeed Studio. Via the Qwiic interface, you can chain up add-on boards over the I2C interface and build up your dev kit with more functionalities (e.g., sensors, LCDs, and other peripherals) as if they were Lego bricks.
The IoT revolution is like one big innovation contest – developers worldwide turn their wildest ideas into products. Only the fastest developers can win, and that's why rapid prototyping has become the most popular market entry strategy in IoT. As a developer, you want to get a head-start in this race and buy the dev kit with the best bang for your buck – such as Silicon Labs Explorer Kit, which provides you all the five power-features, and more, as the only Bluetooth Dev Kit in the $10 price range!